When I’m sending an email via my Hotmail account I’m being prompted to type in some characters.
Why do I have to type these characters and how do I get rid of this prompt?

This Captcha challenge or Human Interaction Proof (HID), as Microsoft refers to it, is to verify that a human is actually sitting behind the computer and sending the emails and not some automated (spam) script. Usually when you get this dialog and you haven’t been doing anything out of the ordinary, you’ll only have to answer this dialog once and won’t be bothered with them for quite some time or at all.

There are various reasons why you might get this prompt;

A better approach would be to only notify your most prominent contacts first and notify the rest after a couple of days once your account has been fully unlocked. Notifying them via other means such as an Instant Message is of course also an option.

Keep getting the character challenge
If you continue to receive the dialog or are otherwise prevented from sending and receiving emails via your Live Hotmail account, you can post an unlock request in the Hotmail Forums of the Windows Live Solution Center. 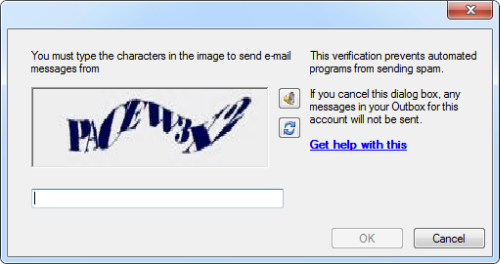 If you cannot read the mangled characters, press the speaker icon to hear them or the refresh icon to get new characters.

Outlook 2016
Step by Step
by Microsoft

Outlook 2013
Step by Step
by Microsoft

This website uses cookies to improve your experience. We'll assume you're ok with this, but you can opt-out if you wish.AcceptRead more